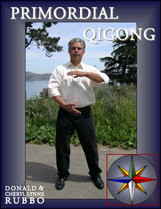 A gem from the treasure chest of Taoist mystical Qigong

In this lovingly crafted eBook, the Rubbos present Primordial Qigong, a gem from the treasure chest of Taoist mystical Qigong, emphasizing the role of mind (intention) in the alchemical process inherent in this form, to help you find the Fountain of Youth.

This exquisitely beautiful form was purportedly developed by the Taoist sage Chang San Feng, and is a precursor to Tai Chi Ch’uan. Through his practice of Primordial Qigong, Master Zhu Hui cured himself of a potentially fatal case of hepatocirrhosis, and dramatically heightened his sensory awareness and intuition to such a degree that he could visually diagnose his patients and administer the correct treatment without error. Zhu Hui became quite famous in China, and after establishing the ‘Tian Ta Guo Qing’ hospital, treated seventy or more patients a day for decades. It’s claimed by its adherents that practicing Primordial Qigong enables you to 'turn back the hands of time,’ because you are moving backwards through the seasons. The form consists of two parts, A & B, repeated for a total of four times. You begin the first Parts A and B facing East, moving counter-clockwise through the form, and conclude Parts A and B facing South (which is clockwise from where you started, facing East.) Starting the second Parts A and B facing South, moving counter-clockwise through the form) at the conclusion you are facing West (clockwise from South.) When you’ve practiced the form for a while, you’ll notice that, while you are creating a double circle, a circle within a circle. Women are usually the first to notice this phenomenon, interestingly enough. Some of the movements in the Primordial Qigong form stimulate the pituitary and pineal glands, and help to awaken the Third Eye and increase intuitive abilities. Practicing this form has definitely increased our hyper-sensory awareness and intuition. In its construct, Primordial Qigong can be viewed as a three dimensional physical mandala: it encompasses all of the primary aspects of Taoist philosophy: the concepts of yin yang, the trinity (heaven, earth and man), the Five Element Wu Xing theory of Traditional Chinese Medicine (TCM), the I Ching, the Bagua and the mystical aspects of numbers. The Primordial Qigong form reflects the Taoist theory of the birth of the universe. These concepts were based on the ancient Chinese sages’ observations of nature, their perception of the alternating balance of energy of the primal forces (yin yang) and the integral relationship between heaven, humanity and earth. These Taoist sages postulated that from the pre-birth state of WuJi (Original Emptiness) came the primal spark and from the primal spark, Taiji (Supreme Ultimate) was born. From Taiji, yin yang manifested as opposing forces. The Bagua,which represents the fundamental principles of reality in Taoist cosmology, is integrated into the Primordial Qigong form: the eight interrelated concepts - the eight trigrams- are represented by the placement of the body in the Center facing the cardinal directions and awareness of the intercardinal directions: northeast, southeast, northwest and southwest, as one turns both counter-clockwise and clockwise throughout the form. The bagua signifies that change is constant, each movement of your body through time and space creates change. Primordial Qigong has been called Wu Ji Qigong, Tai Chi Enlightenment and Enlightenment Qigong, by other teachers of the form. About the authors: Donald and Cheryl Lynne Rubbo are internationally recognized artists, healers, authors, teachers and visionaries, and legends in the American martial and internal arts world. They travel the globe teaching the Rubbo Energy System of Transformation, based on the profound, transformative methods and techniques they’ve learned during their over forty years of immersion in ancient Asian and Western mystical spiritual practices and incorporated into their alchemist’s bags. They are the founders of Paul D. Pickens II Research Foundation, a 501 (C.) (3) nonprofit global health education organization. Pioneers in the Wellness and Personal Development fields, the Rubbos developed the first Qigong program in an American hospital in 1997, which ran for thirteen years, and in 2011 they launched ‘The World Takes a Breath Day’. Their best-selling eBooks include Extraordinary Breath - Making the Power of Deep Breathing Work for You, and The Art and Mastery of Bio Energetic Healing. https://www.facebook.com/DonaldRubbo